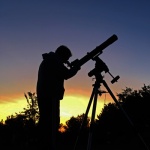 Ohio, the nation, and the world have paused to slow the spread of the potentially-deadly coronavirus responsible for COVID-19 disease. In compliance with state and local restrictions, all meetings and events regularly staged by the Cuyahoga Astronomical Association (CAA) are canceled; none of the group’s scheduled activities will take place until further notice. Updates will be published on this website and on the CAA’s Twitter.

In the mean time, we hope you and your loved ones are healthy and will remain so. Remaining apart is currently our only means of prevention. Let’s hope medical science can quickly find effective treatments and vaccines so that we can be spared future illness, death, and hardship brought on by COVID-19.

UPDATE: The Transit of Mercury program planned for Edgewater Park has been canceled due to a forecast of clouds, rain/snow, and below freezing temps. We’ll have to try again in 13 years when the next transit comes around.

The planet Mercury will cross between Earth and Sun on Monday, November 11, 2019. Given clear skies, members of the Cuyahoga Astronomical Association (CAA) will be stationed at the lower level of Edgewater Park offering safe viewing of the event. Viewing times at Edgewater will be from noon until just after 1:00 p.m.

CAA members will be present with their solar-safe telescopes offering several ways of viewing our Sun. Cloudy skies will, of course, cancel the event. No tickets or reservations are required; those interested should simply come to the park. The transit is a natural, astronomical occurrence and cannot be rescheduled; when it has finished, it is finished!

Anyone with eclipse viewing glasses would be able to view the transit but without the magnification offered by a telescope, the event will be hard to see. Mercury, officially a planet, is not quite three times the size of Earth’s Moon. Viewed from Earth, around 48 million miles distant, Mercury is tiny!

WARNING: NEVER look directly at the sun through binoculars, a telescope, or with your unaided eye. Permanent eye damage and even blindness can result. Astronomers use special filters and glasses to safely observe the sun. Sunglasses, photo negatives, etc. will not protect against eye injury.

Given good sky conditions visitors will be able to view Jupiter, Saturn, star clusters, and Earth’s Moon. In fact, the date coincides with International Observe the Moon Night: a worldwide appreciation of our world’s nearest neighbor in space.

The event is free, open to the public, and is conducted as an “open house” — visitors may arrive and depart at any time during the event’s hours. The CAA’s observatory will be open and association members also will be on hand to share views through their personal telescopes.

An interesting activity any time of year is to make note of the daily changes we see in the phases of Moon. Open the PDF to print a handy guide and journal for lunar observation: Moon Observation Journal.

To find our observatory, and what to expect with a “star party,” visit the following: https://cuyastro.org/caa-observatory/

Seeing Stars Saturday! Coming this weekend: from 9 to 11 PM at Medina County Park District’s Letha House Park West on Saturday, September 7: Visit our observatory and peer through telescopes at our amazing cosmos. Planets Saturn and Jupiter will be spectacular, the Moon will be bright! And let’s not forget amazing star clusters; they would be sad if we did not look at them. {Such showoffs.}

Public observing nights are conducted in the open night air so dress appropriately for fall-like temperatures. There may also be mosquitoes so insect repellent may be a good idea.
Where We Are…

CAA is a member of…